Wow! The country of Japan asked their citizens to include a record of what they were doing in 15 minute intervals. This was done as part of their census and what’s best is they released the data publicly and Jonathan Soma took the results and made a visual graph of the data. Sweet!

Tip: Click on the small text link that says “Everything” to expand the view, or double click on the graph to zoom.

I got the link via Kottke.org.

A recent Dilbert comic proclaims that the key to time management is not wasting time. How true that is. 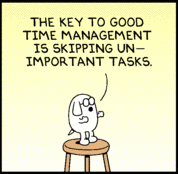 For all of you folks who work at home in solitude: 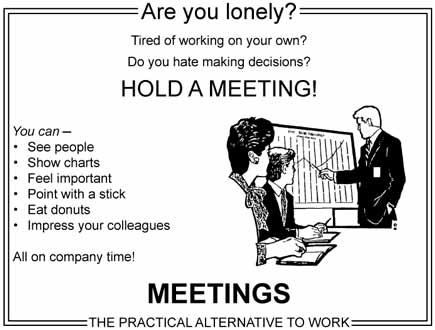 We’re fast becoming fans of Twitter — the coolest social network we’ve seen. If you’re on Twitter, feel free to follow us and learn what we’re up to!

Tornado will have a presence at SXSW this year. We’ve wanted to go for years but always been so busy with client work. This year, we’ve decided to go anyways! We’ve bought our tickets and everything.

So who’s going? Chris Tingom and Thomas Chapin. If you’re going to be there this year, and would like to meet up, just give us a shout. Thanks.

Facing the Giants is a movie about football and this inspirational clip will inspire you to do your best and never give up on your goals.

It’s Ketchup Week! The one week a year when you can ketchup on all of your work! It’s also the week where we’re going to be spending quite a bit of time working on our web app! Should be fun and productive.

I ran across this great picture on Reddit this evening. I just had to pass it along. It’s really a fitting extension to my article I posted in July. 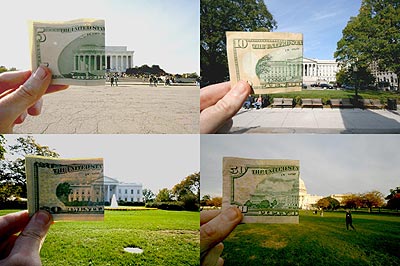 Article: U.S. Currency and the Pictures Behind The Portraits

Simply enter your monthly salary and this tool will show you how much money you are earning in real time. It’s fun and could be depressing all at once. Click here to give it a try.

A boat docked in a tiny Mexican village. An American tourist complimented the Mexican fisherman on the quality of his catch. “How long did it take you to get those?” he asked.

“Not so long,” said the Mexican.

“Then why didn’t you stay out longer and catch more?” asked the American.

The Mexican explained that his small catch was quite enough to meet his needs and feed his family.

“So what do you do with the rest of your time?” asked the American.

“I sleep late, fish a little, play with my children, and take a siesta with my wife. In the evening, I go into the village to see my friends, have a few drinks, play the guitar and sing a few songs. I have a full life.”

The American interrupted. “I have an MBA from Harvard and I can help you! You should start by fishing longer every day. You can then sell the extra fish you catch. With the extra revenue, you can buy a bigger boat.”

“And after that?” asked the Mexican.

“With the extra money the bigger boat will bring, you can buy a second boat and then a third boat, and then more until you have an entire fleet of trawlers. Instead of selling your fish to a middle man, you can then negotiate directly with the processing plants. Pretty soon you could open your own plant. You could leave this little village and move to Mexico City, Los Angeles, or even New York! From there you could direct your whole enterprise.”

“How long would that take?” asked the Mexican.

“Afterwards? Well, my friend,” laughed the American, “that’s when it gets really interesting. When your business gets really big, you can start selling stocks and make millions!”

“Millions? Really? And after that?” said the Mexican.

“After that you’ll be able to retire, live in a beautiful place near the coast, sleep late, play with your children, catch a few fish, take siestas with your wife and spend your evenings drinking and enjoying your friends.”

The moral of the story… Know where you’re going in life — you may already be there.

I absolutely love reading about web and technology startups. The following links are some of my favorite sites to get news about new web applications, and other tech startups. The people behind these businesses and the decisions that they make are interesting to me. Many of these sites offer excellent advice.

The other night I wondered about the pictures we have on our currency and decided to research the portraits behind these pictures. Surprisingly, I couldn’t find too much collected research online and so I’ve decided to post my findings. 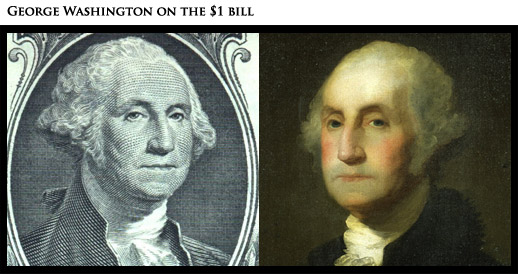 George Washington: Gilbert Stuart painted a number of portraits of George Washington. More than 100 in fact. One of the biggest no-nos in the design community is the horizontal flipping of photos of people. Because your face is not perfectly symmetrical, it is frowned upon as a design technique.

Despite this, our $1 bill contains a reversed picture of George Washington.

It’s really difficult to tell whether the above photo is the exact match. I have prepared two of the likeliest possible photos and matched them up so you can see how closely they match when reversed. 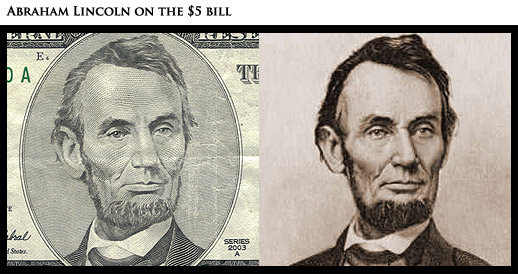 Abraham Lincoln: The easiest of the bunch to declare an obvious match. 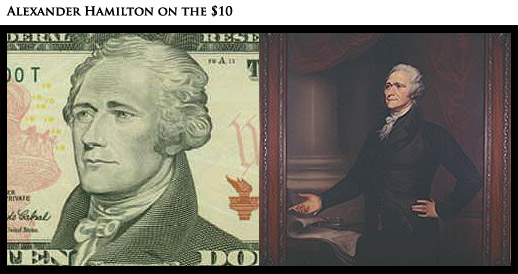 Alexander Hamilton: The first Secretary of the Treasury (appointed by George Washington). The portrait is by Caroline L. Ormes Ransom. 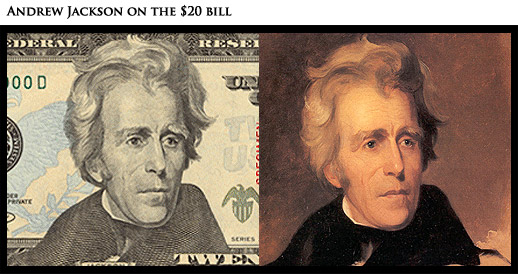 Andrew Jackson: I bet you didn’t know that Grover Cleveland was on the $20 bill in 1914. Trivia: Jackson held an open house party where a 1,400 pound (635 kg) wheel of cheddar cheese was served as refreshment. The cheese was consumed in two hours. View full photo. 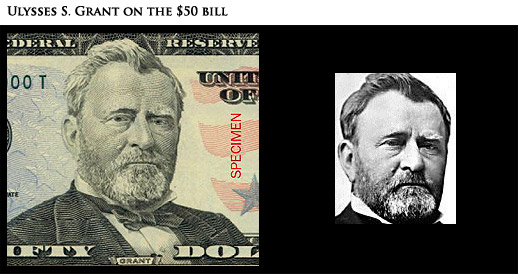 Ulysses S. Grant: This was the best photo I could find that is the exact same as the currency. It is obviously the same picture though, as you can see the hairline is the same. 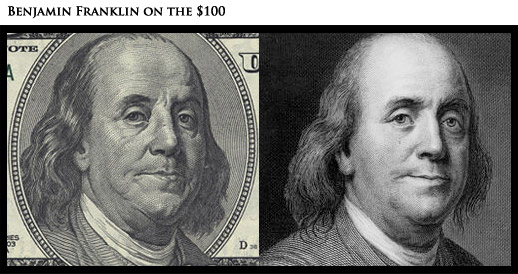 Benjamin Franklin: Probably one of the coolest founding father. He wasn’t just a diplomat, but an electrical genius and very wise. This picture is inspired by an an engraving from a painting by Joseph Duplessis (1783). View full picture. 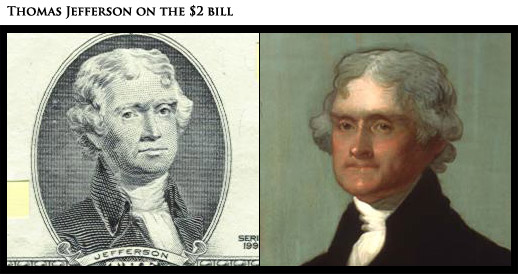 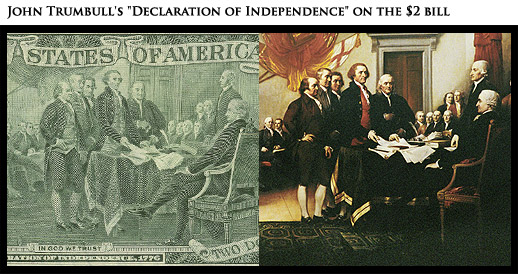 Bonus: The $2 bill is rarely used, but still printed (about 2% of all currency printed). The painting on the reverse side is John Trumbull’s “Declaration of Independence.”

I’m at the Web 2.0 Expo with the crew from Viddler, the coolest video sharing web site! If you’d like to meet me please get in touch. I’ll be here through the 18th.

This blog is devoted to our upcoming product which is a time tracking, project management web application.

What should I name this blog? I’ve decided that I don’t want to name it “The Roundup Blog” because it’s too narrow of a definition. First time visitors to this blog will think it is all about Roundup (it will be much more than that).

For now, the new name is “Track The Time Blog.” It’s simple and based on the domain name. Maybe something more unique will present itself. Post a comment if you have a name suggestion.

The true intention really for this blog is to build a community around these topics. It will take some time before we bring this blog into full focus, but I just wanted to let everyone know of the plan! Thanks.

A little fun for Friday afternoon. 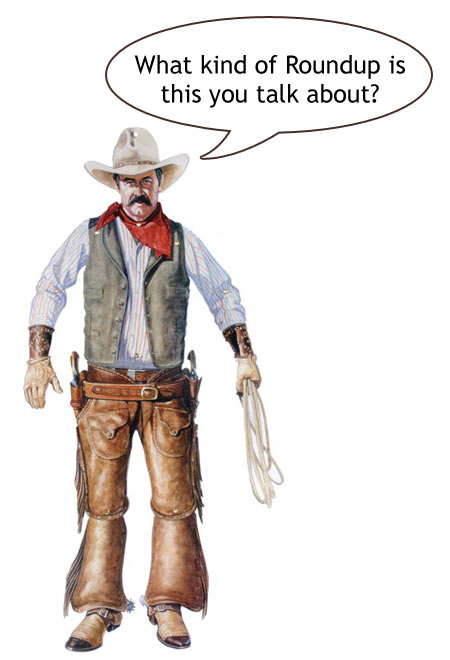 I won’t do a lengthy review of his work, which is amazing. I saw a few pieces at the Desert Caballeros Western Museum in Wickenburg, AZ. 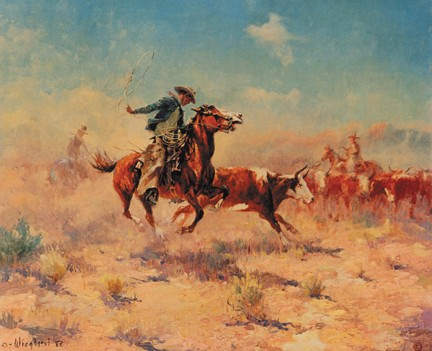 “Back to the Herd” — This mounted cowboy swinging his lariat is riding hard to bring a straying horned steer back to the herd. Olaf was a master at displaying the horse in action as portrayed in this painting.

I’ve discovered some great music for this project. It’s even aptly named. Round-Up, by Erich Kunzel.

I picked it up at the library today, and am sure you are familiar with a number of the songs. For example, The Magnificent Seven, The William Tell Overture (Lone Ranger Theme), and How The West Was Won, among others. Timeless classics that have been used in movies and television commercials.

My favorite part about it, is that it begins with cows mooing. I don’t think you can top that. 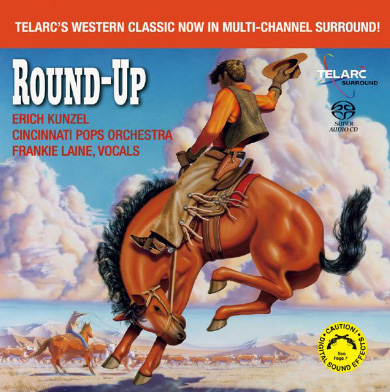