I’ve just signed up for Republic Wireless. This is a new company based in the United States that provides extremely affordable wireless phone service using a combination of WiFi and the Sprint network. Since it includes free roaming, and 5 GB of data transfer, it’s an amazing deal.

What’s even better, is you can sign up and get a 30-day money back guarantee. They provision your phone with a temporary phone number (you can port a number in at any time).

I just signed up for the $5 month plan for starters. What this gives me is unlimited phone calls as long as the phone is connected to a WiFi connection. I am going to port my office phone line over to Republic Wireless. Since I’m planning to have my voicemail and phone also ring on my Verizon Wireless phone number I’ll be saving some money.

How am I saving money? Well, currently I’m paying $20 each month to Cox here in Phoenix just so they can forward my office phone number to a Google Voice phone number. Yeah, so I’m already spending $20 every single month for a stupid service. For some reason, I can’t port the number to Google Voice, but I can port the number over to Republic Wireless.

I ordered the Moto X phone ($299) with the service, so my initial cost was about $320 (includes a few taxes and the first month of service). After nineteen months, I’ll hit that magic break-even moment where I’ll be saving $15/month compared to my current situation with Cox. Since I’ve been paying Cox to forward this line for the last 7-8 years, it was an easy decision.

Oh, and did I mention there is no contract? I can cancel at any time. Here’s the link to the Moto X $299 No Contract from Republic Wireless

I’ll post another review here once I’ve had a month to use the service. My phone should come within the next two weeks. I don’t know how long it will take to port the phone number, but probably not too long considering it only takes a few hours for other phone companies to do the same.

Side note: As a web designer, I was extremely pleased with the Republic Wireless site. Not only did they answer all of my questions, but the site was easy to use, and generally worked as expected. They even have some awesome forums for members who are wondering if there is good service in their area.

The 18 minute “Connecting” documentary is an exploration of the future of Interaction Design and User Experience from some of the industry’s thought leaders. As the role of software is catapulting forward, Interaction Design is seen to be not only increasing in importance dramatically, but also expected to play a leading role in shaping the coming “Internet of things.” Ultimately, when the digital and physical worlds become one, humans along with technology are potentially on the path to becoming a “super organism” capable of influencing and enabling a broad spectrum of new behaviors in the world.

Here’s a great little video that explains how entrepreneurs can change the world. I originally saw the link on Ward Andrews’ blog.

This month I’ve stumbled across two really great improvements to every day products. The stapler and the highlighter. Nothing beats a photo, so here goes:

This stapler has an indent so that every time you staple a piece of paper it’s the same. How freaking brilliant. 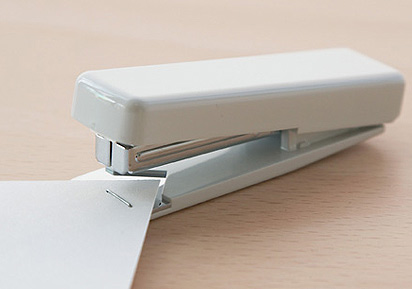 This highlighter makes it easy to circle or just highlight — fantastic and simple. 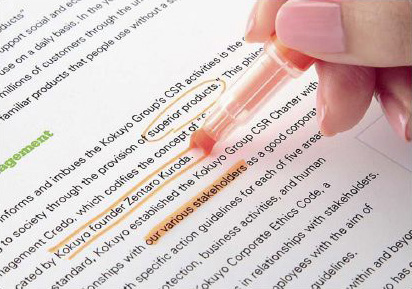 “We make a lot of this stuff up as we go along. I’m serious. We don’t assume anything works and we don’t like to make predictions without real-world tests. Predictions color our thinking. So, we continually make this up as we go along, keeping what works and throwing away what doesn’t. We’ve found that about 90% of it doesn’t work.”

Virtually every project management web application on the market today creates silos of users. What happens is that a company generally will create an account on Basecamp or one of the other tools, and add all of the users to that account. Overall, this is fine. But it’s not perfect because usually people have side projects and moonlight on the side.

From day one we’ve had a better model, which is to let each person stand as their own silo, and link their accounts as needed. This means that you can choose who you share projects with, and other people can invite you to link accounts.

Here’s a graph that shows how Basecamp currently operates:

Diagram A: As you can see, users are created in a virtual container. If you log into a Basecamp account you can see all of the projects for that company, but you can’t easily have your own projects, hidden from your co workers. And you can’t link Basecamp accounts together.

I know a lot of people who have Basecamp accounts, and give user logins to their freelancers. Some freelancers end up with a whole bunch of different login passwords. This creates confusion.

So that’s why we had a better idea. A way to break the silo. Here it is:

Diagram B: We like the concept of “linking accounts” — when you link accounts with someone, they can share or you can share projects. People just see the projects they are added to. In addition, you can designate someone as a “co-owner” of a project enabling them to add other people to that project.

The beauty behind this approach is that your data becomes something you own (even if it is for other peoples projects), and allows you to track all of your time, tasks, and projects in one place.

Please note that this post isn’t meant to be a rant against Basecamp. It’s truly a great product. I simply thought it was useful for explaining how things can be better. Some people don’t need what we offer, and that’s fine. 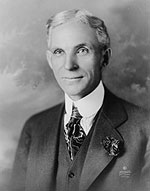 In reading Free Prize Inside!, I ran across a paragraph about Henry Ford. I’ll quote below from the Wikipedia article.

Ford astonished the world in 1914 by offering a $5 a day wage that more than doubled the rate of most of his workers. The move proved hugely profitable. Instead of constant turnover of employees, the best mechanics in Detroit flocked to Ford, bringing in their human capital and expertise, raising productivity, and lowering training costs.

What strikes me most about this tactic is that it goes against everything you would think works. Raising the pay rate of your employees to more than double their current rate — that has failure written all over it.

However, on closer examination, it had this effect:

Ford’s innovation is a fascinating look at how one company maximized the productivity of their workforce. It’s a good use of time. 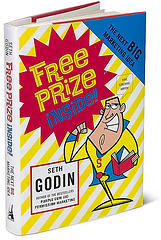 Our product is going to be really cool! We believe we have some truly innovative offerings that nobody has and will be the driving force behind why people choose our product.

When our public beta has commenced, I will be able to tell you what they are, but for now, I want to share some things I have learned from reading Seth Godin’s book, Free Prize Inside.

I admit to being one of those people who rarely buys books. I wasn’t always like this. In the late ’90s I was an avid business book reader. So why did I buy this book? First of all, I’ve been reading the author’s blog, and he usually has at least a few great posts a week worth thinking about.

Secondly, the concept of a free prize interests me. A free prize is something about your product or your service that is worth remarking on, something worth seeking out and buying. The free prize isn’t about what people need, it’s what satifies our wants.

In today’s market, a free prize can drive your products success — rather than expensive television or online advertising campaigns.

Some examples of a free prize:

A free prize gets people talking about your product, and gives you a huge edge. It’s something your competition doesn’t have.

The free prize is often something simple, rather than an expensive overhaul of a business. We think that’s what we’re doing with Roundup — building off of the typical time tracking methods, and creating a new way to track your time.

We think our product has several free prizes. Stay tuned.