How to graduate college faster

Instead of using some elaborate organizing system, I stuck with a very basic pen and paper to-do list. My only organizing tool was a notepad where I wrote down all my assignments and their deadlines. I didn’t worry about doing any advance scheduling or prioritizing. I would simply scan the list to select the most pressing item which fit the time I had available. Then I’d complete it, and cross it off the list.

If I had a 10-hour term paper to write, I would do the whole thing at once instead of breaking it into smaller tasks. I’d usually do large projects on weekends. I’d go to the library in the morning, do the necessary research, and then go back to my dorm room and continue working until the final text was rolling off my printer. If I needed to take a break, I would take a break. It didn’t matter how big the project was supposed to be or how many weeks the professor allowed for it. Once I began an assignment, I would stay with it until it was 100% complete and ready to be turned in.

Help for teachers to balance their work and private lives. How to organize to-do lists, paperwork and time to best help teachers get more done.

How do people spend their time?

MARGARET THATCHER, a former British prime minister, reportedly got by on just four hours’ sleep a night. Such deprivation would trouble many people, and certainly the French, who sleep for nearly nine hours on average, according to a report by the OECD. True to stereotype, the French also spend the most time eating and drinking of OECD members—indeed, they eat for almost twice as long as the Americans. The Japanese appear to have a tough time of it, working by far the longest hours. However, they also devote less time to unpaid work such as household chores and childcare, activities that account for around one third of the OECD’s GDP.

Watch Ricardo Semler give a talk about “Leading by Omission.”

A few years ago I read the book Maverick by this man, and it was really good and got me thinking about a lot of topics.

About the Lecture — If successful business depends on innovation, wonders Ricardo Semler, why are automobiles made essentially the same way today as they were in Ford’s first assembly line 100 years ago? Parallel parking is one of “ the stupidest things we do,” says Semler, “If we had a day, could we not by tomorrow afternoon figure out a way to make a car” that handles better in this common situation — or, on a grander scale, escape from the “silly concept” of oil dependent transportation altogether? The problem, Semler figures, is that there’s “something fundamental about organizations and … leadership that makes it almost impossible for people inside a business to change their own industry.” Industries are based on “formats that are basically legacies of military hierarchies,” says Semler, which neglect or deny the power of human intuition and democratic participation. In Semler’s own firm, there are no five-year business plans (which he views as wishful thinking), but rather “a rolling rationale about numbers.” A project takes off only if a critical mass of employees decides to get involved. Staff determine when they need a leader, and then choose their own bosses in a process akin to courtship, says Semler, resulting in a corporate turnover rate of 2% over 25 years. “We’ll send our sons anywhere in the world to die for democracy,” says Semler, but don’t seem to apply the concept to the workplace. This is a tragic error, because “people on their own developing their own solutions will develop something different.

How much do freelancers actually make an hour? (It’s a lot less than you think.)

Every day we’ll email you to ask, “What’d you get done today?”

Inch by inch, anything’s a cinch.

We’ll keep a calendar for you of what you got done. Look to your streak from yesterday to motivate you today.

Benjamin Franklin gives us this: 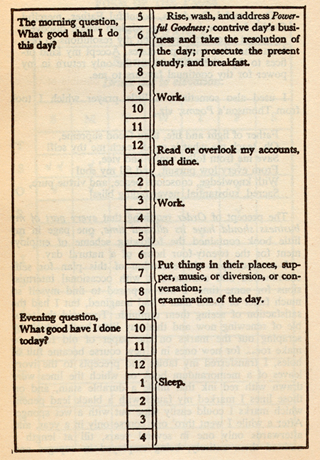 This puzzle calendar from ThinkGeek is pretty cool! 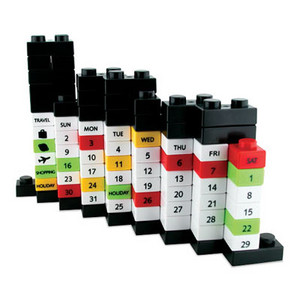 A good blog post about scheduling time for creativity.

An interesting blog post (and discussion) over at The Design Cubicle about finding out your customers budget.

Ultimately, my whole approach to what I do is 95% effort and 5% talent. I really see it as a sport. You probably won’t become a tennis player if you don’t stand on the court for six hours a day and whack balls over the net. And if you do that, you have to be incredibly untalented for it not to work. But I think it’s tempting to think as a creative professional, you sit there and you’re creative. So much of it is just doing it everyday for hours.

Smashing Magazine has published an article titled Passing The Holy Milestone: How To Meet Deadlines. It’s rather lengthy, but worth a read.

Saw this gem from Paul Graham today and had to share:

A few days ago I realized something surprising: the situation with time is much the same as with money. The most dangerous way to lose time is not to spend it having fun, but to spend it doing fake work. When you spend time having fun, you know you’re being self-indulgent. Alarms start to go off fairly quickly. If I woke up one morning and sat down on the sofa and watched TV all day, I’d feel like something was terribly wrong. Just thinking about it makes me wince. I’d start to feel uncomfortable after sitting on a sofa watching TV for 2 hours, let alone a whole day.

And yet I’ve definitely had days when I might as well have sat in front of a TV all day—days at the end of which, if I asked myself what I got done that day, the answer would have been: basically, nothing. I feel bad after these days too, but nothing like as bad as I’d feel if I spent the whole day on the sofa watching TV. If I spent a whole day watching TV I’d feel like I was descending into perdition. But the same alarms don’t go off on the days when I get nothing done, because I’m doing stuff that seems, superficially, like real work. Dealing with email, for example. You do it sitting at a desk. It’s not fun. So it must be work.

Here are ten great tips for taking charge of your time.

Just read this tip on how to get things done when you have children:

I would spend lots of time thinking, and making notes randomly whenever I could. Then when I could sit down and do some work, I would have a plan. Another aspect that always helped, is that I was never able to get the list done. Which meant always knew what I was going to start on next.

Tonight while reading Hacker News I ran across a post describing the Pocket-To-Do. A cool template file you can download and print that gives you this: 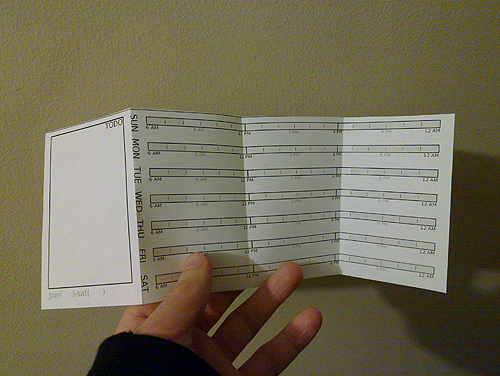 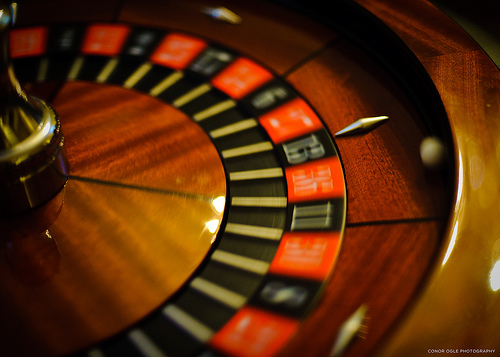 Quick! Think about what you were eating for lunch a week ago on Monday. I bet you can’t remember. That’s my point. Time tracking after-the-fact is dumb and totally inaccurate.

At best, you’ll be able to guess about the chunks of time, but never the detail. You’ll forget all of the little things you did, and you’ll be forced to fudge the numbers.

Use your brain, use a stopwatch.